Benefits of an SSD seedbox over a hard drive seedbox

So you’ve seen seedbox providers advertise SSD seedboxes at hiked up prices. You’re wondering whether the cost worth it?

The short answer is an SSD seedbox blows a standard seedbox out the water. But only for some applications.

Before we get into the how and why, let’s talk briefly about how SSD technology differs from a HDD.

An SSD is a faster storage media. It’s entirely digital so data can be stored and retrieved much faster than a conventional hard drive.

An SSD can write & rewrite data much quicker than a hard drive. To give you an example, here is the comparison between a SSD and HDD 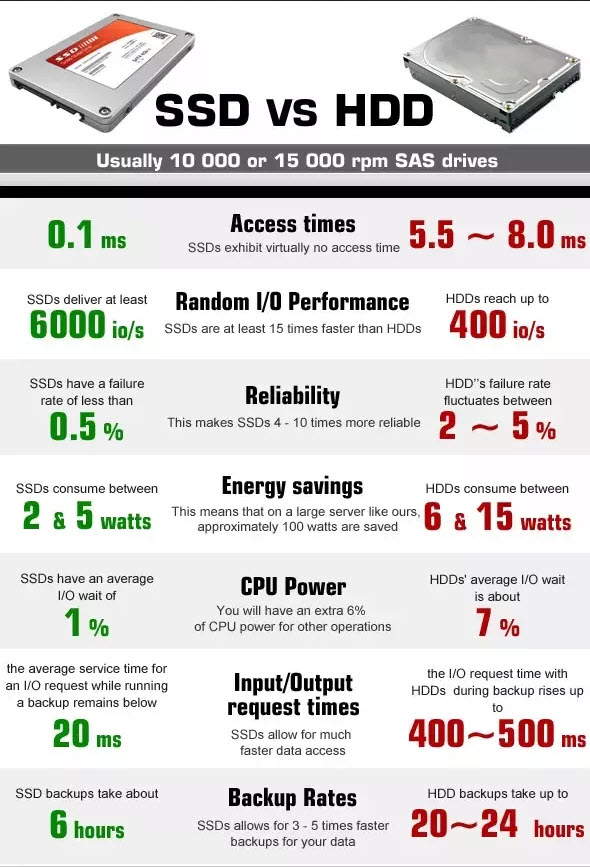 You may be mistaken for thinking that a seedbox’s job is pretty straightforward, read one long sequential block of data and upload to peers. But you’d be wrong. There are a lot of consecutive data reads that take place on a seedbox. A single movie file can be split up into 100 bits, each bit of that file may be requested by 50+ different peers which would require the seedbox to loads and return that file concurrently with all the peers.

A mechanical HDD will struggle to retrieve data with high concurrent demands like this. A mechanical HDD’s head requires positioning, and the platter to be spun around into position. The head can only read one position at a time. So a HDD has a really hard time in reading data from several places at once.

So you can see how a HDD can create a bottleneck and hamper a seedbox from performing optimally. A peer (downloader) will make a download request to several different seeders and commit to the first few seeders.

If the seeder cannot connect to the peer in time before they max out their connect limit then the seeder loses that chance.

For an SSD seedbox with far superior IOPs, this is not something to break a sweat over. Because the data gets stored on flash media, it gets turned over to the torrent service in milliseconds without delay. An SSD can produce data in 10,000 – 100,000 IO/s, whereas a mechanical HDD can top out at 400 IO/s on a good day.

So what does that mean in the real world? Well, it means that that data storage is not a bottleneck on an SSD seedbox. You will end up seeding a lot more on busier swarms and use up more of your precious upload speeds. Often with an HDD seedbox, the limiting factor isn’t your upload speed; it’s the drive not able to turn around quicker and connect to peers.

An SSD seedbox is especially valuable for seedbox racing. It’s handy for seeding fresh torrents as it allows you to connect to peers on large swarms and connect to many more users than you would with an HDD seedbox.
Though most swarms are not that big after a week or so, so something it’s useful to have two seedboxes, one with an SSD and with a regular HDD. You can load all the fresh torrents on the SSD and after a week, transfer them to standard seedbox.

Seedbox.io has good priced SSD seedboxes starting at $17 a month. You can read my user review here. Or you can go directly to seedbox.io here.

Added to wishlistRemoved from wishlist 0

Free VPN with seedboxes through OpenVPN

We will be happy to hear your thoughts

Benefits of an SSD seedbox over a hard drive seedbox

Free VPN with seedboxes through OpenVPN

Create Your Own Seedbox For Free